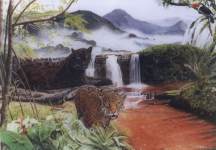 The Confederacy of Undivulged Principles is a gargantuan, efficient nation, ruled by Finynaar Astori with a fair hand, and remarkable for its otherworldly petting zoo, unlimited-speed roads, and smutty television. The hard-nosed, democratic, humorless population of 37.817 billion Confederates are free to do what they want with their own bodies, and vote for whomever they like in elections; if they go into business, however, they are regulated to within an inch of their lives.

The relatively small, liberal, outspoken government juggles the competing demands of Defense, Education, and Industry. It meets to discuss matters of state in the capital city of Kalatynaar. The average income tax rate is 96.1%.

The frighteningly efficient Confederate economy, worth an astonishing 40,352 trillion Silver Seers a year, is driven entirely by a combination of government and state-owned industry, with private enterprise illegal. However, for those in the know, there is an enormous, deeply entrenched, broadly diversified black market in Information Technology, Book Publishing, Tourism, and Arms Manufacturing. The private sector mostly consists of enterprising ten-year-olds selling lemonade on the sidewalk, but the government is looking at stamping this out. Average income is a breathtaking 1,067,040 Silver Seers, and distributed extremely evenly, with practically no difference between the richest and poorest citizens.

The nation's new Mylab space station is notorious for being the loneliest place above the planet, the nation's universities are often mistaken for foreign embassies, a new generation of aquariumless hotels are being built under government supervision, and the government funds large training centres to turn Jaguars into functioning members of society. Crime, especially youth-related, is so common that it is unusual to encounter someone following the law, perhaps because of the country's complete lack of prisons. Undivulged Principles's national animal is the Jaguar, which frolics freely in the nation's many lush forests.

Undivulged Principles is ranked 207,534th in the world and 31st in Eladen for Largest Mining Sector, scoring -47.2 on the Blue Sky Asbestos Index.

Most Recent Government Activity: 16 hours ago