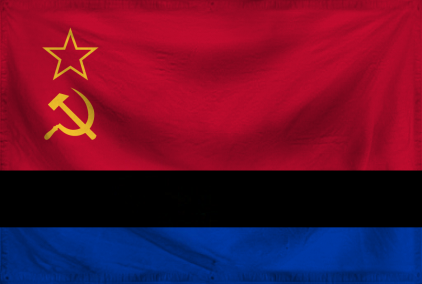 The Socialist Union of Lebriuton is a massive, genial nation, renowned for its barren, inhospitable landscape, hatred of cheese, and devotion to social welfare. The compassionate population of 3.126 billion Lebriutonians are fiercely patriotic and enjoy great social equality; they tend to view other, more capitalist countries as somewhat immoral and corrupt.

The large, socially-minded government juggles the competing demands of Defense, Welfare, and Administration. It meets to discuss matters of state in the capital city of Kelashinsky City. The average income tax rate is 66.2%, and even higher for the wealthy.

The sizeable but sluggish Lebriutonian economy, worth 79.2 trillion Noneuropean Kronees a year, is driven entirely by a combination of government and state-owned industry, with private enterprise illegal. The industrial sector, which is quite specialized, is led by the Arms Manufacturing industry, with major contributions from Uranium Mining, Retail, and Information Technology. Average income is 25,320 Noneuropean Kronees, and distributed extremely evenly, with practically no difference between the richest and poorest citizens.

The thin blue line is composed of picketing police officers demanding better pensions, cyber-crime and tin-foil hat sales are both increasing at record rates, citizens praise the weeds that overwhelm their narrow vegetable realm, and people believe that if you teach a man to fish he won't buy fish from you any more. Crime, especially youth-related, is totally unknown, thanks to a well-funded police force and progressive social policies in education and welfare. Lebriuton's national animal is the capitalist pig, which teeters on the brink of extinction due to widespread deforestation.

Lebriuton is ranked 258,004th in the world and 42nd in Noneuropean Union for Most Efficient Economies, scoring 12.5 on the Krugman-Greenspan Business Outlook Index.