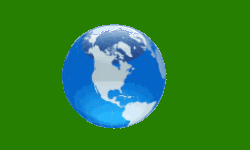 The Pale Blue Dot of The Planet Earth is a gargantuan, socially progressive nation, remarkable for its burgeoning microbe population. The quiet, industrious population of 20.613 billion Planet Earthians enjoy extensive civil rights and enjoy a level of social equality free from the usual accompanying government corruption.

The medium-sized, liberal, socially-minded government juggles the competing demands of Law & Order, Education, and Social Policy. The average income tax rate is 34.6%, but much higher for the wealthy.

The large but underdeveloped Planet Earthian economy, worth 511 trillion leaves a year, is quite specialized and led by the Information Technology industry, with major contributions from Door-to-door Insurance Sales, Uranium Mining, and Pizza Delivery. Black market activity is notable. State-owned companies are common. Average income is 24,802 leaves, and distributed extremely evenly, with little difference between the richest and poorest citizens.

Crime is well under control, thanks to a capable police force and progressive social policies in education and welfare. The Planet Earth's national animal is the microbe.

The Planet Earth is ranked 173,069th in the world and 4th in Solar System for Rudest Citizens, with 35.57 Insults Per Minute.

Most Recent Government Activity: 20 hours ago