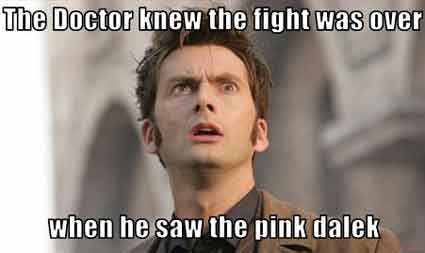 The Little Queendom of The Pink Dalek is a gargantuan, environmentally stunning nation, renowned for its absence of drug laws. The hard-nosed, democratic population of 19.292 billion Pink Dalekians hold their civil and political rights very dear, although the wealthy and those in business tend to be viewed with suspicion.

The large, liberal, outspoken government juggles the competing demands of Welfare, Healthcare, and Education. The average income tax rate is 37.7%, but much higher for the wealthy.

The large but inefficient Pink Dalekian economy, worth 702 trillion Kaleds a year, is quite specialized and led by the Trout Farming industry, with major contributions from Beef-Based Agriculture, Furniture Restoration, and Cheese Exports. State-owned companies are reasonably common. Average income is 36,431 Kaleds, and evenly distributed, with the richest citizens earning only 2.6 times as much as the poorest.

Crime is almost non-existent, thanks to a capable police force and progressive social policies in education and welfare. The Pink Dalek's national animal is the Thal, which frolics freely in the nation's many lush forests.

The Pink Dalek is ranked 75,242nd in the world and 6th in The Doctor Who Universe for Largest Insurance Industry, scoring 2,294.92 on the Risk Expulsion Effectiveness Rating.

Most Recent Government Activity: 23 days ago