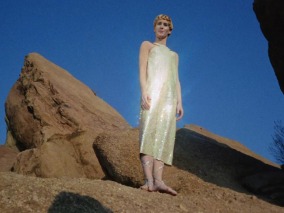 The Unidentifiable Power of The Metrons is a massive, environmentally stunning nation, ruled by A Young Blond Boy in a White Shift with an even hand, and renowned for its compulsory vegetarianism, frequent executions, and digital currency. The hard-nosed population of 3.505 billion Metrons are fiercely patriotic and enjoy great social equality; they tend to view other, more capitalist countries as somewhat immoral and corrupt.

The medium-sized, socially-minded government juggles the competing demands of Administration, Defense, and Education. It meets to discuss matters of state in the capital city of The Arena. The average income tax rate is 48.0%, but much higher for the wealthy.

The large but sluggish Metron economy, worth 115 trillion Federation Credits a year, is driven entirely by a combination of government and state-owned industry, with private enterprise illegal. However, for those in the know, there is a slick, highly efficient black market in Information Technology, Arms Manufacturing, Retail, and Book Publishing. The private sector mostly consists of enterprising ten-year-olds selling lemonade on the sidewalk, but the government is looking at stamping this out. Average income is 32,955 Federation Credits, and distributed extremely evenly, with practically no difference between the richest and poorest citizens.

Legislators must raise their hands if they want to speak, murderers frequently escape punishment by claiming they were protecting their honour, economic planning is exalted as a human art form, and citizens praise the weeds that overwhelm their narrow vegetable realm. Crime, especially youth-related, is totally unknown, thanks to a capable police force and progressive social policies in education and welfare. The Metrons's national animal is the Alien Raider, which frolics freely in the nation's many lush forests.

The Metrons is ranked 203,765th in the world and 146th in United Earth Space Probe Agency for Most Developed, scoring 50.08 on the Human Development Index.

Most Recent Government Activity: 13 days ago