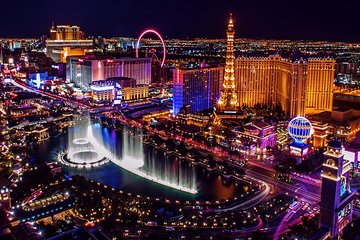 The Casinos of The Las Vegas Strip is a massive, efficient nation, ruled by Las Vegas with an even hand, and notable for its free-roaming dinosaurs, public floggings, and smutty television. The hard-nosed, hard-working population of 3.951 billion Las Vegas Stripians are either ruled by a sleek, efficient government or a conglomerate of multinational corporations; it's difficult to tell which.

The tiny government juggles the competing demands of Education, Defense, and Law & Order. It meets to discuss matters of state in the capital city of Las Vegas. Citizens pay a flat income tax of 5.6%.

The frighteningly efficient Las Vegas Stripian economy, worth 491 trillion dollars a year, is broadly diversified and led by the Retail industry, with major contributions from Arms Manufacturing, Information Technology, and Gambling. Average income is an impressive 124,312 dollars, but there is a large disparity between incomes, with the richest 10% of citizens earning 565,747 per year while the poor average 16,698, a ratio of 33.9 to 1.

The government officially wants you to slow down and speak more clearly, RPG fans reminisce fondly about when people thought they were evil and dangerous rather than geeky and socially inept, soldiers on first dates introduce themselves only by their ranks and serial numbers, and the government regularly reassures citizens that there are no monsters under their beds. Crime is moderate, with the police force struggling against a lack of funding and a high mortality rate. The Las Vegas Strip's national animal is the wolf, which is also the nation's favorite main course, and its national religion is Las Vegas.

The Las Vegas Strip is ranked 22,787th in the world and 2nd in Las Vegas Henderson Paradise for Most Secular, with 49.07 Atheism Rate.

Most Recent Government Activity: 5 days ago