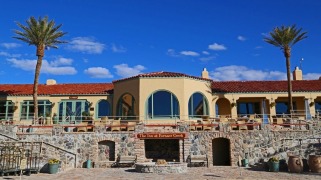 The Inn At Death Valley

The Rooms And Facilities of The Inn At Death Valley is a colossal, safe nation, ruled by Xanterra Parks And Resorts with a fair hand, and remarkable for its infamous sell-swords, irreverence towards religion, and restrictive gun laws. The compassionate, hard-working, democratic population of 5.405 billion Inn At Death Valleyians enjoy a sensible mix of personal and economic freedoms, while the political process is open and the people's right to vote held sacrosanct.

The large, corrupt government juggles the competing demands of Education, Environment, and Industry. It meets to discuss matters of state in the capital city of The Inn At Death Valley. The average income tax rate is 77.4%, and even higher for the wealthy.

The frighteningly efficient Inn At Death Valleyian economy, worth 682 trillion dollars a year, is led by the Book Publishing industry, with major contributions from Information Technology, Tourism, and Retail. Average income is an impressive 126,310 dollars, and evenly distributed, with the richest citizens earning only 2.0 times as much as the poorest.

School lessons are constantly interrupted by 'teacher needs a break' time, all recreational drugs are legal, an increasing percentage of the population's youth have homosexual parents, and elections have become procedural nightmares due to voters persistently rejecting candidates. Crime, especially youth-related, is totally unknown, thanks to a capable police force and progressive social policies in education and welfare. The Inn At Death Valley's national animal is the desert tortoise, which frolics freely in the nation's many lush forests, and its national religion is The Desert.

The Inn At Death Valley is ranked 7,997th in the world and 5th in Death Valley for Most Developed, scoring 91.54 on the Human Development Index.

Most Recent Government Activity: 8 hours ago