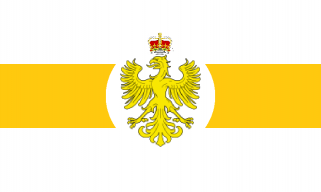 The Grand Kingdom of Rusozak is a gargantuan, safe nation, ruled by King Ardrus II with an even hand, and renowned for its irreverence towards religion, punitive income tax rates, and stringent health and safety legislation. The hard-nosed, humorless population of 12.451 billion Rusozaks have some civil rights, but not too many, enjoy the freedom to spend their money however they like, to a point, and take part in free and open elections, although not too often.

It is difficult to tell where the omnipresent, corrupt government stops and the rest of society begins, but it juggles the competing demands of Defense, Law & Order, and Healthcare. It meets to discuss matters of state in the capital city of Pobedagrad. The average income tax rate is 89.6%, and even higher for the wealthy.

The thriving Rusozakian economy, worth 842 trillion Rusozak Units a year, is driven almost entirely by government activity. The industrial sector, which is highly specialized, is mostly made up of the Arms Manufacturing industry, with significant contributions from Woodchip Exports and Automobile Manufacturing. Average income is 67,705 Rusozak Units, and distributed extremely evenly, with little difference between the richest and poorest citizens.

Women wearing male lounge-wear are quizzed for hours by mental health practitioners, political gridlock ensues as even the most innocuous legislation is vetoed by the Supreme Court for potential civil rights violations, Pobedagrad spends billions upgrading public transport, and politicians' financial records are locked up tighter than the nation's Rusozak Unit reserves. Crime is totally unknown, thanks to the all-pervasive police force and progressive social policies in education and welfare. Rusozak's national animal is the Rusozak Eagle, which is also the nation's favorite main course, and its national religion is Rusozak Orthodoxy.

Rusozak is ranked 226,319th in the world and 241st in The Land of Kings and Emperors for Highest Drug Use, scoring 12.2 on the Pineapple Fondness Rating.

Most Recent Government Activity: 117 minutes ago

Land of the Nobles,