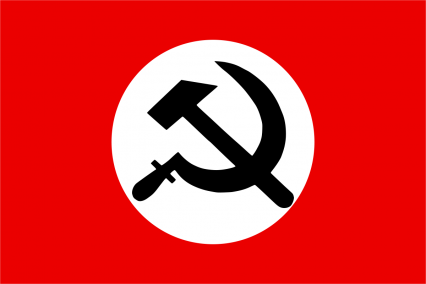 The People's Republic of NazBol Party Supporter is a massive, environmentally stunning nation, notable for its compulsory military service, irreverence towards religion, and punitive income tax rates. The hard-nosed, cynical population of 3.577 billion NazBol Party Supporterians are ruled with an iron fist by the dictatorship government, which ensures that no-one outside the party gets too rich. In their personal lives, however, citizens are relatively unoppressed; it remains to be seen whether this is because the government genuinely cares about its people, or if it hasn't gotten around to stamping out civil rights yet.

The enormous, socially-minded, well-organized government juggles the competing demands of Law & Order, Defense, and Welfare. The average income tax rate is 71.6%, and even higher for the wealthy.

The sizeable but stagnant NazBol Party Supporterian economy, worth 45.5 trillion Nazboliuns a year, is driven entirely by a combination of government and state-owned industry, with private enterprise illegal. The industrial sector, which is quite specialized, is led by the Information Technology industry, with major contributions from Beef-Based Agriculture, Pizza Delivery, and Arms Manufacturing. Average income is 12,729 Nazboliuns, and distributed extremely evenly, with practically no difference between the richest and poorest citizens.

Tourists from around the world come to visit the country's famous rainforests, genetic researchers have been expelled, pet owners must make a payment if their charges leave a deposit, and TV shows must meet strict ethnicity quotas. Crime, especially youth-related, is totally unknown, thanks to the all-pervasive police force and progressive social policies in education and welfare. NazBol Party Supporter's national animal is the pig, which frolics freely in the nation's many lush forests.

NazBol Party Supporter is ranked 239,064th in the world and 3rd in New Yellow Empire for Highest Wealthy Incomes, with 13,188 Standard Monetary Units.