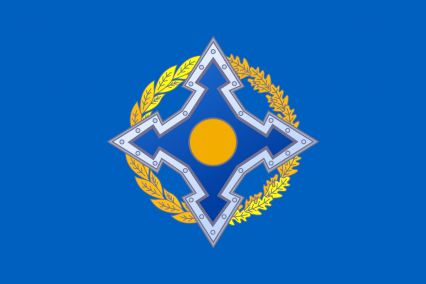 The Stratocracy of CSTO-ODKB is a huge, orderly nation, renowned for its barren, inhospitable landscape, digital currency, and suspicion of poets. The compassionate, cynical population of 955 million CSTO-ODKBians are kept under strict control by the oppressive government, which measures its success by the nation's GDP and refers to individual citizens as "human resources."

The medium-sized, corrupt, moralistic, well-organized government prioritizes Defense, although Law & Order, Education, and Welfare are also considered important, while Spirituality receives no funds. It meets to discuss matters of state in the capital city of Moscow. The average income tax rate is 37.2%.

The strong CSTO-ODKBian economy, worth 60.4 trillion Rubles a year, is fairly diversified and led by the Automobile Manufacturing industry, with major contributions from Furniture Restoration, Arms Manufacturing, and Information Technology. State-owned companies are reasonably common. Average income is 63,286 Rubles, and evenly distributed, with the richest citizens earning only 4.3 times as much as the poorest.

Political activists are routinely executed, the nation's first space rocket -- sponsored by Eckie-Ecola and shaped like an enormous soda bottle -- is being developed, CSTO-ODKB has designated Moscow as its capital city, and employers are keenest on employees who lack family values. Crime, especially youth-related, is totally unknown, thanks to a well-funded police force and progressive social policies in education and welfare. CSTO-ODKB's national animal is the Bear, which teeters on the brink of extinction due to widespread deforestation.

CSTO-ODKB is ranked 159,420th in the world and 13th in mutual cooperation alliance for Fattest Citizens, with 9.5 Obesity Rate.