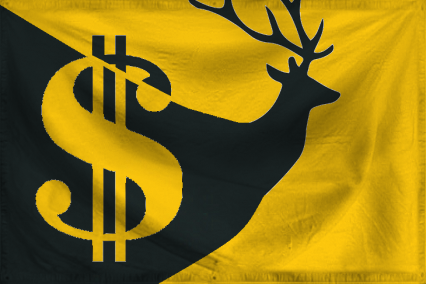 The Libertarian Paradise of Cashdeer is a gargantuan, efficient nation, ruled by CEO Moneybags with a fair hand, and remarkable for its rum-swilling pirates, barren, inhospitable landscape, and digital currency. The hard-nosed, hard-working, democratic, humorless population of 24.482 billion Cashdeers live in a state of perpetual fear, as a complete breakdown of social order has led to the rise of order through biker gangs.

There is no government in the normal sense of the word; however, a small group of community-minded, corrupt, liberal, pro-business, outspoken individuals is effectively ruled by the Department of Industry, with Law & Order and Environment not funded at all. It meets to discuss matters of state in the capital city of Friedmangrad. Income tax is unheard of.

The frighteningly efficient Cashdeerian economy, worth an astonishing 13,096 trillion Credits a year, is driven almost entirely by the private sector, which is broadly diversified and led by the Retail industry, with major contributions from Soda Sales, Gambling, and Uranium Mining. Average income is a breathtaking 534,964 Credits, but there is a vast disparity between incomes, with the richest 10% of citizens earning 3,775,222 per year while the poor average 25,550, a ratio of 147 to 1.

Public enemies often walk home with spotless garments and crime records, murderers and thieves claim divine inspiration to avoid prosecution, Cashdeerian husbands are dead good at fathering kids, and movement-triggered sensors mean that for every door that closes another one opens. Crime, especially youth-related, is so common that it is unusual to encounter someone following the law, perhaps because of the country's complete lack of prisons. Cashdeer's national animal is the Cash Deer, which is also the nation's favorite main course, and its national religion is Worship of Money.

Cashdeer is ranked 242,914th in the world and 5th in Pontbridge Islands for Most Popular Tourist Destinations, with 1.68 Tourists Per Hour.

Most Recent Government Activity: 21 hours ago