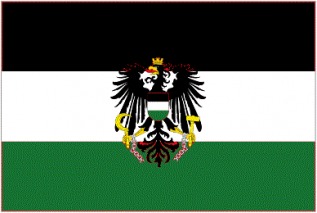 The Bundesrepublik of Austrakia is a gargantuan, orderly nation, renowned for its compulsory military service. The hard-working, cynical population of 12.276 billion Austraks are ruled by a mostly-benevolent dictator, who grants the populace the freedom to live their own lives but watches carefully for anyone to slip up.

The relatively small government prioritizes Defense, although Law & Order, Education, and Welfare are also considered important, while International Aid isn't funded at all. The average income tax rate is 18.5%.

The Austrakisch economy, worth 639 trillion Schillings a year, is broadly diversified and led by the Uranium Mining industry, with major contributions from Information Technology, Beef-Based Agriculture, and Arms Manufacturing. Average income is 52,084 Schillings, and evenly distributed, with the richest citizens earning only 3.7 times as much as the poorest.

Voting is compulsory, punitive tariffs protect local industry, crime suspects are forced to submit to blood testing, and the alarmingly racist TV show 'Bigtopians Say the Darndest Things' is a hit. Crime, especially youth-related, is almost non-existent, thanks to a capable police force and progressive social policies in education and welfare. Austrakia's national animal is the Black Eagle, which can occasionally be seen dodging aircraft in the nation's cities.

Austrakia is ranked 114,313th in the world and 14th in Teremara for Largest Welfare Programs, scoring 1,070.2 on the Safety Net Mesh Density Rating.

Most Recent Government Activity: 14 days ago